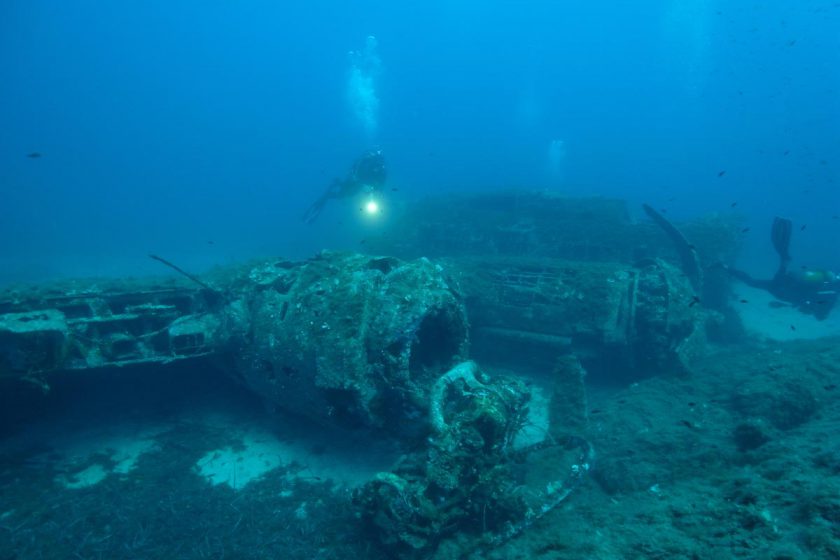 A must for scuba divers is diving the famous bomber wreck B-17 in Calvi, Corsica. It is a well-preserved B-17 World War II bomber wreck. Calvi is one of my favorite cities in Corsica.

It is a nice little town on the northwest coast of Corsica. With about 5400 inhabitants, Calvi is the fourth largest and one of the most visited cities. Corsica is a beautiful and mountainous Mediterranean island. I can recommend Calvi for the awesome beaches which are well known, also the crescent-shaped bay.

The large medieval citadel with its cobblestone streets is located at the western end of the bay above the marina. The old town is very beautiful with the governor’s palace, the picturesque yacht and ferry port.

At the covered market, you can buy products from the Balagne in the morning. At the entrance to the Port de Commerce you can admire the Tour de Sel, in which the salt of the city was once stored. Also worth a visit is the pink domed church Sainte-Marie-Majeure in the center.

In the middle of the city wall you will see the baroque cathedral Saint-Jean-Baptiste. When you walk along the harbor at the quai promenade named Landry you will find many good restaurants there.

The church Notre Dame de la Serra is situated on a hill in the interior of the country. From there you have picturesque views of the surrounding area.

The bomber B-17 was the most famous American bomber of the World War II. This aircraft model was also called a “flying fortress” because it was known for its stability. She was able to take on almost incredible damage and still fly on.

The machine is located in front of the port of Calvi. She crashed on February 14, 1944 near the citadel.

The goal of the mission was the railway cross of Verona. But before they reached their goal, the bombers were attacked by German hunters. The bomber was badly damaged and had to make an emergency landing on the water off Calvi. The tail broke off. It sank within a short time.

When you are diving the wreck you will find it lying at about 25 m depth on the ground. It is located 200 m in front of the port of Calvi at the height of the citadel. The wreck is still very well preserved and a popular diving destination. The wings are almost intact and the four engines are clearly visible.

Unfortunately most of the propeller blades were removed. The nose was destroyed by the impact. The cockpit with its two metal seats and the intervening instruments are still quite well preserved. A little further away are the remains of the stern and a tail wheel.

Since the wreck is not very deep you have enough time to explore the wreck exactly. Then you can comfortably dive back to the bay.

There are several very centrally located Diving Centers in Calvi. It’s best to give yourself an idea by booking your dives right there.

You are interested in wreck diving? See also my post about Chuuk Truk Lagoon.
Or have a look exploring scuba diving at Motutaiko Island in Lake Taupo New Zealand.